Description of a successful ascent

We finally arrived in Iran. When I say we, I talk about the Marcu family, which means Alexandra, Dana and Dan Marcu, the team that with the help of the County Board of Hunedoara, Romania, our county, was commissioned to carry the local flag on the top of this huge volcano.

Damavand is also the highest volcano of Asia and it will count as the forth volcano that Alexandra manages to successfully climb in her attempt to finish the Seven Volcanoes Circuit.

So we landed in Teheran, the huge capital of Iran, a capital city bustling with activity and people.

We were met at the terminal by the family we contacted via internet and accepted to accommodate us and help us find our way around and to the mountain. We spent 2 days in Teheran, visiting the city and trying to accommodate to the new environment and in the morning of the third day we set off for the volcano.

Things did not come our way exactly the way we wanted. Me and Alexandra had wanted to get on the mountain as soon as possible, in order to give ourselves more time to deal with the mountain, get proper acclimatization and try to avoid falling in the same trap as we did on Elbrus.

The ascent of Elbrus in Russia kind of marked us as we run out of time over there and had to attempt the climb at any costs. It took us two attempts, every time on snow storm conditions in order to succeed  reaching the top.

So we managed to get on the slopes of Damavand a day later than we had decided which meant that we would have to improvise. Again.

The trip to Damavand from Teheran takes around 2 hours or more, depending on the traffic conditions.

We took the Harez road, the highway that leads to the Caspian Sea and arrived at Polour village, where we found the statue of the climber pointing toward the direction we were supposed to take. Our host was very impressed about our knowledge of the surroundings, not knowing how much time we have spent doing our homeworks and searching in order to be prepared for anything.                                 As we  were kind of short of time we skipped the first camp and headed directly for the second, Goosfand Sara. One has to follow the road indicated by the statue and pay attention to the signs of the road.

The road to Camp 2, Goosfand Sara is a not paved one and there is no junction over there. The paved road carries on past the sign marking the direction to Camp 2 and it is very easy to get mistaken.

We took the gravel road and thanks to the lady that was driving the car that accepted to pass to me the steering wheel we managed to get very close to Camp 2. There is no need for 4×4 if one drives carefully. From the spot we parked the car we had to walk for another 10 minutes in order to reach Goosfand Sara.

Once we got there we followed the well trodden path, also used by the donkeys that carry the heavy luggage of the climbers not willing to put up with this chore. Not our case as we  were not swimming in oceans of money.

The path goes zigzagging  but on a general direction straight up the mountain.

Once again, we had to skip proper acclimatization and marched directly toward last camp, situated at the altitude of 4200.

I was thinking that if we manage to get there in time we would have time for an hour trip up the slopes for a bit of  acclimatization and a better chance the next day, but the odds were against me and my daughter.

We were climbing surrounded by those magnificent poppies, on a beautiful summer day when all of a sudden the weather conditions changed dramatically. The temperature dropped suddenly, the wind rose up and ten minutes later we were climbing in the middle of a storm that shifted from rain to freezing rain very quickly.

With the experience that Alexandra and I have behind we managed to keep warm and in control but Dana was freezing and I had to pass all kind of cloth  items to her.  Anyway, hours later we got finally to the last camp.

We were the only climbers in sight and we choose the old refuge as our base. In ten minutes Alex and I managed to peg the tent in the refuge, in an attempt to offer more warm to Dana, set her in covered in 3 sleeping bags and prepared the tea. Poor Dana was shaking uncontrollably and crying. Not exactly a good beginning.

Finally things settled down. Dana fell asleep, we had supper and later on we went for the new refuge to pay them a visit.

These fantastic  Iranians. I read so much about them before coming over, about how welcoming they are, and supportive and polite, but they surpassed all expectation.  We explained to them, people in charge of the refuge and mountain, that we were there on official business, that Alexandra was youngest mountain climber in Romania and about the Circuit. And not only they exempted us from paying the mountain fee but an Iranian guide proposed to us to follow him and the group he was leading next morning for the top for free. Never ever this happened to us before and we thank these wonderful people for their support and help.

According to this, next morning by 5 o’clock we showed up and set off for Damavand summit in the wake of the group of 3 climbers led by our Iranian guide.

Basically one has to take the trail from behind the new refuge and climb directly uphill till the end and then take right and follow the ridge.

The summit was supposed to be marked with the statue of a climber but we found only his shoes.

There were fumaroles everywhere but they never bothered us and I did not see for a moment the necessity for vinegar masks.

As a suggestion for the ones that read our travel and mountaineering blog, please mark the point where you turn right. The return is very tricky so try to retrace your steps and pay attention at to where you have to turn left this time.

The ascent of Damavand was a long and very demanding uphill trek for us and one needs good physical shape and good moral in order to succeed. 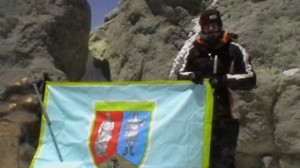 It also was the forth volcano for my 15 years old Alexandra after Kilimanjaro, Pico de Orizaba and Elbrus. Next in line is Giluwe in Papua New Guineea, the continent of Australia Oceania.

Also it was for the second time in my life that my daughter takes me to the top of a famous mountain in order to celebrate my birthday. When  I turned 44 on Mont Blanc and now for 46 on Damavand. Thank you, my daughter.

When we finally made it back I had the surprise of seeing a group of 20 Iranians singing Happy birthday to Dan from the bottom of their hearts. Imagine my surprise when I realized that Dan was me, actually.

As soon that they realized my wife was there, at the refuge, alone and scared they began feeding her, watering her with tea and trying whatever they could in order to take her mind off the child and man that were battling their way up the mountain.               We also were invited to have tea and supper with them which we gladly did. And the pictures.

I think by this time the internet must be infected with my face. So many pictures. They are extremely fond of having pictures with the foreigner, the tourist that come to visit their beautiful country.

At the end I want to thank again The Embassy of the Islamic Republic of Iran in Bucharest for all their support and help and also miss Alina Dumitrescu who made things happen. 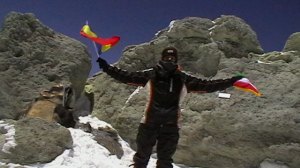 3 Responses to Ascent of Damavand