Bobby the Carver, Stanley Smiley and Junior the Warrior

We have met a lot of people in Papua New Guinea. Welcoming people, that kept smiling at us. Among them there are some that have impressed us more than others.

We met Bobby the Carver as soon as we arrived in the village of Alkena. I noticed him right away. He was always around us. Together with Stanley. Stanley Smiley, said my daughter. Regardless to the request I was having, Bobby and Stanley were always ready to help. And God knows that at the beginning we had a lot of requests as we were trying to adapt to the new life that was surrounding us. 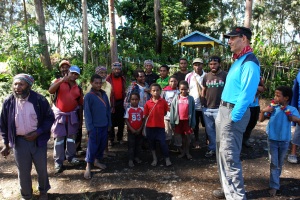 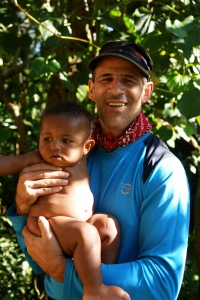 I am the one on the right hand side

When we arrived in the village I was expecting to find the world wide famous inscription ready and waiting for us. Instead it turned out that our local contact had been involved in some other problems and had completely forgotten about making it. Or maybe he had just not realized the importance of such a thing. Does not matter any more but the story was that now I had to find a solution and find a way to make or have made the wooden structure that was supposed to mark the peak from that moment on.

So I began explaining the matter to the boys surrounding us. I told them about how we were going to write the words: Erected by Mondika tribe on it, and about all that it could mean to them and the village. As I was speaking I noticed the face of Bobby. A smile had begun to crack on his lips. 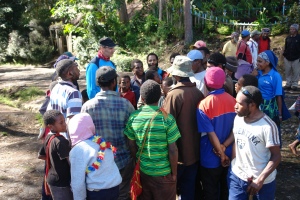 I try to make myself clear

He was understanding the message I was trying to convey to them. From that moment we turned into my helper. First we had to find some boards, which is kind of difficult considering the place we were.

Bobby spoke to Father, the father of our local contact, the Mondika man. Father considered things, grabbed an ax and together with me and Bobby made some very beautiful boards out of some fire wood.

Alexandra and Bobby working side by side

I have a gift

Next we had to find a chisel, paint, hammer, nails and brush. But we were there, in a village, in the bush. But Bobby did not take no for an answer and neither did I. So during the next days we managed, together, to find the tools, buy the paint, make the brush out of some stem and now we were ready to start working.

It was a real workshop that we set up there. Alexandra drew the letters, Bobby carved them and I was painting. The work picked up speed when some other boys joined us. By night fall we were having the inscription ready. It was the first night that I could really sleep. Things were taking shape our way, slowly but surely.

At one moment I said: Erected by Mondika tribe, Dan and Alexandra Marcu and, and Bobby said- Carved by Bobby. And here how the legends take shape- Bobby the Carver.

We are getting ready to set off for the peak

One last snapshot before we start walking

Alexandra and Bobby on the trail

Bobby accompanied us everywhere, cut the poles from the bush, climbed the steep tower when others refused to come, traveled with us in PMV in order to guide us in the city and every time I or we needed something he was there. Thank you Bobby.

Bobby the Carver and his work

One day we were getting ready for another trek in the surroundings of the village when I noticed that Bobby was bare footed. The day was grim and wet, the ground soaking wet and slippery.

I told Bobby to try my spare pair of shoes. As he put them on I turned to him and said: “Do not forget to give them back to me later on”. We began walking. Five minutes later I turned again toward Bobby and said: Bobby, you can keep them. It’s a gift from me to you. Bobby’s face split up in a broad smile.

Man, I felt good. The warmth inside my belly was telling me I had done the right thing.

Another guy that we enjoyed having around was Junior the Warrior. He showed up on the day we started our ascent of the mountain. A kick boxer, with a very well built body and always carrying the bush knife Junior was also a good humored, open minded boy. From that day on he accompanied us everywhere and we owe him the trek in the jungle where we were shown the skulls of the dead warriors and the fantastic encounter that we had with his family.

Junior and his family

On the top. Alexandra and her bodyguard

Junior took us one day to pay a visit to his family and so we had another opportunity to sit around the fire surrounded by people while I was telling them stories and jokes. I have to admit that day I went way over my normal way of being as Junior asked me to tell his clan about life in Europe and Romania.

At the end, even Alexandra was staring at me in disbelief while everybody else were laughing their heads off. But this was due to the fact that they made me feel welcome and that they were giving another possibility to my daughter to have a fantastic life experience.

Two boys, that managed to show us in the middle of Papua New Guinea the generosity and goodwill of their people.

1 Response to Bobby the Carver, Stanley Smiley and Junior the Warrior